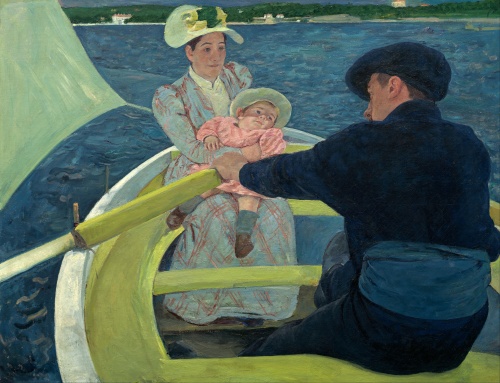 What I love about The Boating Party by American artist, Mary Cassatt, is impression of movement, of the life of the water. It has a feeling of contentment, of peace. There is a serenity about this painting that evokes wonderful memories of boating and water sports, of the time when my family still lived on a lake. It reminds me of the sheer joy and freedom of being on the water with no purpose other than to enjoy one’s self.

About this painting, from Wikipedia:

Art historian and museum administrator Frederick A. Sweet calls it “One of the most ambitious paintings she (Cassatt) ever attempted.” His 1966 analysis focuses on the balance of the “powerful dark silhouette of the boatman”, the angle between the oar and the arm that “thrusts powerfully into the center of the composition towards the mother and child” and “delicate, feminine ones.”

Cassatt placed the horizon at the top of the frame in Japanese fashion.

Frederick A. Sweet suggests that Cassatt may have been inspired by Édouard Manet‘s Boating from 1874.

I hadn’t considered that position of the horizon as being a traditional Japanese style until I read that paragraph. Then I realized that most Western artists place it lower on the canvas. In Western art, the sky (an allegory for God) traditionally dominates the work.

This painting has made me aware of  how greatly the ability to travel the world via ocean liners and contact with other cultures changed the way we produce art. Impressionism was new and daring in its time. The eye of the artist was freed from traditional confines of the various schools (Hudson Valley, etc.) by exposure to the simplicity and elegance of the previously unknown tradition of Japanese art.

My life as an admirer of art is one of constantly finding something new about history and the world around me.

About the artist, Via Wikipedia:

Mary Stevenson Cassatt (May 22, 1844 – June 14, 1926) was an American painter and print-maker. She was born in Allegheny City, Pennsylvania (now part of Pittsburgh’s North Side), but lived much of her adult life in France, where she first befriended Edgar Degas and later exhibited among the Impressionists. Cassatt often created images of the social and private lives of women, with particular emphasis on the intimate bonds between mothers and children.

She was described by Gustave Geffroy in 1894 as one of “les trois grandes dames” (the three great ladies) of Impressionism alongside Marie Bracquemond and Berthe Morisot.

3 responses to “#FineArtFriday: The Boating Party, by Mary Cassatt 1893”