The Inferential layer: A wide layer of unknown quantity #amwriting

The inferential layer lies just below the surface of our story. Here is where we attempt to show why Chekhov’s gun hangs on the wall. We insert small clues in the early pages, hints that raise the specter of chance, the suspicion that the weapon will be fired.

We offer conflicting hints that might explain who will fire it and show their journey to the place in the story where they squeeze the trigger.

Who will take down the gun and fire it? Which of several possibilities will be the victim?

And when the gun finally does go off, everything that has gone before, all the hints and allegations—it all comes together in the reader’s mind.

The inferential layer of any story, not just murder mysteries, is the realm of conjecture and suggestion.

In this part, the pieces of the puzzle are placed on the table, seemingly randomly.

We insert implications along with a few false clues about the core problem, hoping the reader will draw their own conclusions. If they guess wrong, we hope they aren’t disappointed.

The path to the moment of the final event should be logical but complicated. Perhaps no one knows precisely what led to it, but your task is to fill the layer with clues, hints, and allegations.

This is where inference and implication are good tools to employ. If the reader is given hints regarding the deeper story, they will stay with it, hoping to uncover more information on the next page or the one after that.

Humans are as curious and tenacious as cats.

The apparent story is displayed on the surface. Perhaps you bought a sci-fi book featuring a murder on a space station.

As you get deeper into the narrative, you might discover a profound philosophical story folded within the outward mystery.

Consider an envelope with the word “murder” written on it.  Inside is a folded note, and when that is opened, you find only one word, “avenger.” The story of the murder is the plot, the outer shell.

Folded within the first note is a smaller folded note, one with the words “honor,” “betrayal,” and “abandonment” written on it. We’ll say that in this case, an officer’s overconfidence is the “what,” the mechanism that starts the dominoes falling toward the inciting incident.

And finally, the core note, folded in the shape of an origami swan. When you unfold it, you see only one word: “sin.”

Whose sin? What sin? Why is it so egregious that someone had to die for it? The dominoes stop falling here: An older brother’s death in a preventable accident is the why of the story.

In reading the inferential layer of the story, readers open the metaphorical envelope, draw out the notes, and begin deducing the meaning of what is about to happen.

Serious readers want this layer to mean something on a level that isn’t obvious. They want to experience that feeling of triumph for having caught the meaning. That surge of endorphins keeps them involved and makes them want more of your work.

Murder is not confined to political thrillers and cozy mysteries. It’s an event that can be written into any kind of setting, from romance to sci-fi to fantasy, and makes for brilliant westerns.

In this story, grief is our theme. Grief is an emotion common to the human experience, and one we can all relate to.

But it’s not the only theme in this story. There could be one or more supporting themes, all of which add substance and depth to it:

Supporting themes are shown through:

Symbolism in the visual setting can reinforce the overall theme and the subthemes. Dark objects, sharp objects, photographs, private mementos—take, for example, a locket containing the picture of a deceased brother as a young cadet.

These are subtle nuances and don’t work well if they are shoved out into the open.

Imagine: the MC is dressing for her shift. She picks up the locket, opens it, and gazes at the picture before she closes it and puts it around her neck, concealing it under her shipsuit. She goes to her job on the bridge, where she does the work of a science officer, and the day begins uneventfully. The reader is introduced to the other players, all of whom seem like good people with no dark secrets.

The scene with the locket is a good clue that some more profound event is in the works.

Getting the hints into the story so that they are just visible but not glaring requires thought and careful planning.

We have to be cautious about how we apply this layer. Not too much, because readers of all genres love to puzzle things out for themselves.

Yet, we need to insert some clues as to the fundamental cause of the murder, or the reader will be left with the dreaded “WTF?” reaction—something we never want.

This layer is best applied in the second draft of a novel. Because the story is written, you know just what clues the reader will need.

Foreknowledge is good. Armed with the logical plot, the author can instill the subtler hints and also insert the occasional misdirection while keeping the flow of the story plausible. 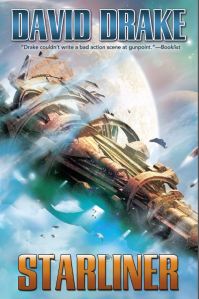 That quality of intrigue and plausibility is what I as reader will seek out when I am in the mood for a good sci-fi novel.

One of my favorite sci-fi novels is 1992’s Starliner, by David Drake, an action adventure written in a leisurely style. Politics, racism, and the privilege of class and wealth dominate this tale of a cruise gone bad.

Drake applies the sort of attention to detail that one might find in an Agatha Christie novel, if she had decided to write political thrillers set in interstellar space. In some ways, despite being solidly sci-fi, it’s a period piece.

When I look at the many layers that make up this book, I see a classic example of the inferential layer done right.

Tagged as Chekhov's Gun, Starliner by David Drake, symbolism in writing, the inferential layer of a story

8 responses to “The Inferential layer: A wide layer of unknown quantity #amwriting”