#FineArtFriday: The Great Fish Market by Jan Brueghel the Elder 1603 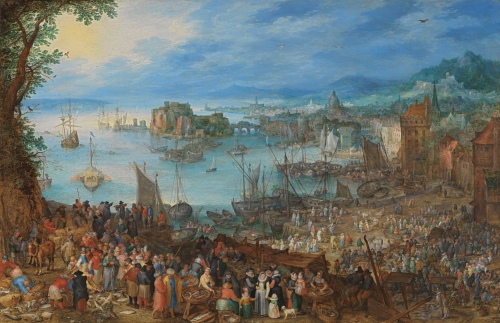 Here we see a composite of all the places Jan Brueghel the Elder had visited. The scene is a fusion of his Flemish homeland and impressions of places he’d sketched on his travels.

In the middle of the picture is the Neapolitan Castel dell’ Ovo, on the right, in the distance, is St. Peter’s Basilica in Rome. We have a little of Italy thrown in with the Flemish, his effort to create the feeling of a busy, prosperous market. He shows his imaginary city from a high perspective, the god-like view.

In writing, this would be the omniscient point of view.

The elements presented in this painting, the harborscape, the ruins, and even the sections that are simply landscapes are all features that later became genres in their own right.

The scene contains many elements of Mannerist landscape painting. According to the Tate website, mannerist is a sixteenth-century style of art and design characterized by artificiality, elegance, and an aesthetic portrayal of the human figure.

In other words, they painted fantasy. And why not?

In this painting, the story opens with a view across a downward-sloping foreground. It teems with life, hundreds of figures of many races, grouped around the stalls and booths of a fish market. The group at the center of the foreground is thought to be a self-portrait of the artist and his family. It was common for artists to insert self-portraits in their works, and Jan often included his family.

One of Jan Brueghel’s most significant contributions to the craft of painting landscapes was how he depicted perspective. The eye is drawn towards the harbor in the background. We look out across the bay, along the coastline, and see entire towns, with ruins, wharves, and castles. Beyond that, we see distant mountains, painted with a blue that merges with the blue of the sea.

This blending of shape and color into the distance is how a landscape appears in real life.

These painters, and the Brueghel family in particular, were the generation who paved the way for artists like Rembrandt. Their works were the foundation upon which the masterpieces of the middle-to-late 17th century were built.

Jan Brueghel was the son of the eminent Flemish Renaissance painter Pieter Brueghel the Elder.  A close friend and frequent collaborator with Peter Paul Rubens, the two artists were the leading Flemish painters in the first three decades of the 17th century.

He was born in Brussels as the son of Pieter Brueghel the Elder and Maria Coecke van Aelst. His mother was the daughter of the prominent Flemish Renaissance artists Pieter Coecke van Aelst and Mayken Verhulst. His father died about a year after Jan’s birth in 1569. It is believed that after the death of his mother in 1578, Jan, together with his brother Pieter Brueghel the Younger and sister Marie, went to live with their grandmother Mayken Verhulst, who was by then widowed. Mayken Verhulst was an artist in her own right. The early Flemish biographer Karel van Mander wrote in his Schilder-boeck published in 1604 that Mayken was the first art teacher of her two grandsons. She taught them drawing and watercolor painting of miniatures. Jan and his brother may also have trained with local artists in Brussels who were active as tapestry designers.

Jan Brueghel the Elder is regarded as an important innovator of landscape art. By introducing greater naturalism in his Alpine mountain settings, his father had expanded on the world landscape tradition that had been founded mainly by Joachim Patinir. Some of Pieter the Elder’s works also foreshadowed the forest landscape that would start to dominate landscape painting around the turn of the 16th century. Pieter the Elder also developed the village and rural landscape, placing Flemish hamlets and farms in exotic prospects of mountains and river valleys.

Jan developed on the formula he learned from his father of arranging country figures traveling a road, which recedes into the distance. He emphasized the recession into space by carefully diminishing the scale of figures in the foreground, middle-ground, and far distance. To further the sense of atmospheric perspective, he used varying tones of brown, green, and blue progressively to characterize the recession of space. His landscapes with their vast depth are balanced through his attention to the peasant figures and their humble activities in the foreground.

Like his father, Jan Brueghel also painted various village landscapes. He used the surrounding landscapes as the stage for the crowds of anecdotal, colorfully dressed peasants who engage in various activities in the market, the country roads and during the rowdy kermesses. Jan Brueghel’s landscape paintings with their strong narrative elements and attention to detail had a significant influence on Flemish and Dutch landscape artists in the second decade of the 17th century. His river views were certainly known to painters working in Haarlem, including Esaias van de Velde and Willem Buytewech, whom Brueghel may have met there when he accompanied Peter Paul Rubens on a diplomatic mission to the Dutch Republic in 1613.

Jan Brueghel was, along with artists such as Gillis van Coninxloo one of the prime developers of the dense forest landscape in the 17th century. Jan Breughel in fact experimented with such works before Coninxloo’s first dated wooded landscape of 1598. In his forest landscapes Brueghel depicted heavily wooded glades in which he captured the verdant density, and even mystery, of the forest. Although on occasion inhabited by humans and animals, these forest scenes contain dark recesses, virtually no open sky and no outlet for the eye to penetrate beyond the thick trees.

One response to “#FineArtFriday: The Great Fish Market by Jan Brueghel the Elder 1603”