My novel, Mountains of the Moon, was born in 2008. It began life as a storyline for an anime-based RPG that never went past planning into production. The original title was Neveyah, named after the world in which it was set.

MOTM is set in an alternate universe and takes place in an environment that was ground zero for a war between gods. As a result of that battle, the gods were prohibited from acting directly against each other and must now act through their people. When the story opens, the World of Neveyah has been recovering for a thousand years.

I had created the maps for the role-play game, so before I began writing Wynn’s story as a novel, I knew the topography of his world.

Of course, I got distracted and wrote Tower of Bones, a story set two generations later before I finished MOTM, but that’s how writing works for me.

I went to science to see how long it takes for an environment to recover from cataclysmic events. I took my information from a place I live a two-hour drive away from, the Channeled Scablands of Washington State. This vast desert area is  comprised of the scars of a natural disaster that occurred around 18,000 years ago.

From Wikipedia: The Cordilleran Ice Sheet dammed up Glacial Lake Missoula at the Purcell Trench Lobe.[10] A series of floods occurring over the period of 18,000 to 13,000 years ago swept over the landscape when the ice dam broke. The eroded channels also show an anastomosing, or braided, appearance.

I had to first build and then destroy the ecology for the game. All RPG players will tell you that a hazardous environment and correspondingly dangerous creatures are a core part of a game’s story. Hazards present threats the protagonist must learn to coexist with. Overcoming and surviving danger raises a player’s skills and strength.

That concept of personal growth through action is a feature of all adventure stories.

Thanks to that year of prep-work on the game, when I began writing the book, all the hard work was done. Many hours of work and years of writing is why the world seems so solid from the opening paragraphs.

When we first brainstormed the idea of writing a fun, yet deep and meaningful story and making a computer game out of it, my partner had two requests. He wanted the central character to be under a curse. Also, he wanted Wynn’s arc to take him from the most naïve, sheltered twenty-year-old ever to walk the planet, to a strong adult capable of making a difference in a world that could sometimes be a terrible place.

So, with those requests in mind, I sat down and wrote a 3500-word outline of events, and answered as many questions about the world as I could think of at the time:

Blue camas and wild mustard on the Violet Prairie, Tenino Washington, in May 2014

The world of Neveyah is an alien environment, yet it’s extremely familiar to me. I based the plants and topography on the world I live in, the Pacific Northwest. The plants and geography are directly pulled from the forested hills and farmlands of Southern Puget Sound and Western Washington State.

Who did he meet (Jules Brendsson)? What did he see, and how did that meeting go?

When he realized he couldn’t go home, how did Wynn react to his new environment?

It was written as a game, so the environment plays a part in the characters’ learning curve. Coping with it is how the characters “level up” or grow in strength. While Wynn didn’t expect to fall into Neveyah, Jules had been sent specifically to meet and instruct him in the use of magic. Wynn and Jules must walk from the meeting place to a town.

As they are walking, Jules must get to know Wynn and teach him how to use a form of magic. What does Jules think about his student? Looking through Wynn’s eyes, what does he see in each scene?

This is where atmosphere comes into world-building, something we’ll go into detail about on Wednesday.

On this original world-building document, I wrote every detail I could think of, from the largest and most dangerous creatures down to the insects. Over the next four years, as I wrote the novel, I added to it whenever I thought of something new.

In the process of building the world that Wynn Farmer fell into, his storyline began to write itself.

The act of designing the immediate scenery builds the entire world in your mind. I go with the familiar, with some strange twists thrown in for fun.

You might tell me that you can’t picture a place you haven’t been to. But what does that really mean? 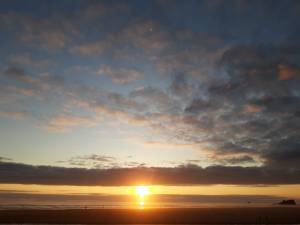 Open your eyes and look around. At this moment you have all the elements you need to create an alien or alternate world. These elements could exist before your eyes, or they exist in your memory.

Use what you know, reshape it, reuse it, and make it yours.

Everyone has a place they want to be more than anywhere else. For me, one place on earth represents my serenity, my creative happy place, and it exists in the real world but is a four-hour drive from my home.

Yet, when I need to, I can pull that place up in my mind. By visualizing my summer retreat, I recharge my serenity-batteries.

Open a new document, one that will be your world-building work sheet. What kind of place seems to build itself in your mind? This is an environment you are mentally connected to. In writing that that place, it will flow from you and convey itself to the reader. Write down the sights, smells, and the emotions you experience when thinking about it.

Perhaps it is a real place, and maybe you experience a sense of longing when remembering that place. If so, write how it makes your physical self feel.

This the point where cosmology and human nature intersect to create atmosphere, and we will continue this discussion on Wednesday.

All images and maps used in this post are the creation and intellectual property of Connie J. Jasperson.