#FineArtFriday: The Gleaners by Jean-François Millet 1857 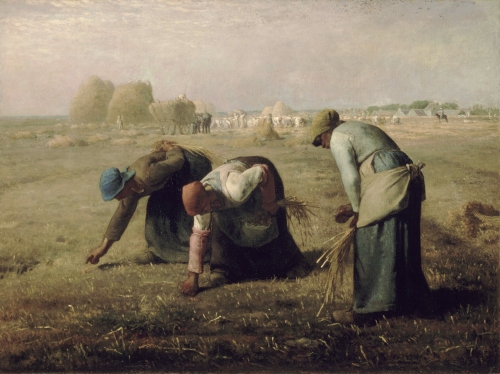 Wikipedia says: Gleaning is the act of collecting leftover crops from farmers’ fields after they have been commercially harvested or on fields where it is not economically profitable to harvest.

In nearly all paintings showing this labor, artists painted poor women doing the work of gleaning. Historically, the majority of impoverished families were headed by single, usually widowed, working women, who had few opportunities for employment and were paid less for their labor than men. This trend of lower pay for women overall continues, with the US Census reporting on Sep 10, 2019 that the median income for households maintained by single women  was $45,128,  as compared to households maintained by single men, who had a median income of $61,518 in 2018.

Jean-François Millet (October 4, 1814 – January 20, 1875) was a French artist and one of the founders of the Barbizon school in rural France. Millet is noted for his paintings of peasant farmers and can be categorized as part of the Realism art movement. Toward the end of his career he became increasingly interested in painting pure landscapes. He is known best for his oil paintings but is also noted for his pastels, conte crayon drawings, and etchings.

About The Gleaners (1857) via Wikipedia:

This is one of the most well known of Millet’s paintings. While Millet was walking the fields around Barbizon, one theme returned to his pencil and brush for seven years—gleaning—the centuries-old right of poor women and children to remove the bits of grain left in the fields following the harvest. He found the theme an eternal one, linked to stories from the Old Testament. In 1857, he submitted the painting The Gleaners to the Salon to an unenthusiastic, even hostile, public.

(Earlier versions include a vertical composition painted in 1854, an etching of 1855–56 which directly presaged the horizontal format of the painting now in the Musée d’Orsay.)

A warm golden light suggests something sacred and eternal in this daily scene where the struggle to survive takes place. During his years of preparatory studies, Millet contemplated how best to convey the sense of repetition and fatigue in the peasants’ daily lives. Lines traced over each woman’s back lead to the ground and then back up in a repetitive motion identical to their unending, backbreaking labor. Along the horizon, the setting sun silhouettes the farm with its abundant stacks of grain, in contrast to the large shadowy figures in the foreground. The dark homespun dresses of the gleaners cut robust forms against the golden field, giving each woman a noble, monumental strength.

2 responses to “#FineArtFriday: The Gleaners by Jean-François Millet 1857”