#FineArtFriday: The Baker by Job Adriaenszoon Berckheyde, circa 1681 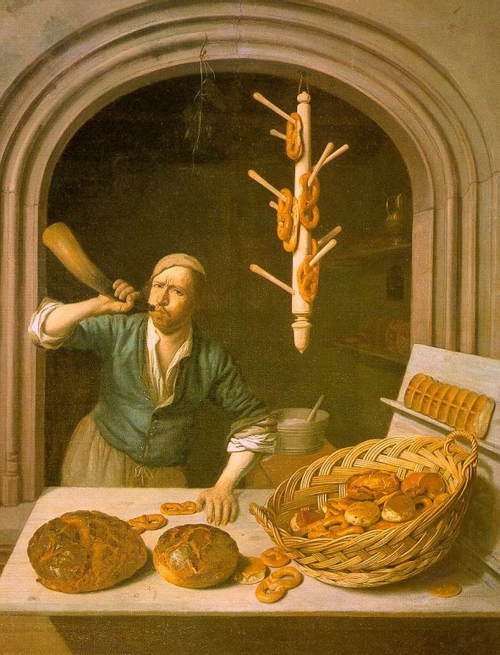 Berckheyde painted several pictures of bakery shops. These genre paintings of bakeries were popular as a subject for Dutch artists from around 1650.

When I first saw this image, I wondered why our baker is blowing a horn. I discovered that was how some bakers announced the morning’s freshly baked bread.

Like most merchants in 17th century Holland, bakers often worked out of their own homes. However, their ovens were well-known fire threats. Entire cities would go up in a raging conflagration that no one could out run or stop, often burning for days. For this reason, many neighbors didn’t really want a baker going into business next door to them.

To minimize the fire risk, some towns and cities required bakers to live and do business in stone buildings. This law explains the artist’s rather monumental choice of architecture as the background for The Baker. It looks the the entrance to a cathedral.

Berckheyde chose to make this a self-portrait. I like this decision, for he was honest in how he presented himself, He is not too handsome, but is surrounded by a wide, tempting assortment of goods, including pretzels. The wooden rack they’re displayed on would be at home in any bakery shop today.

I would definitely buy my family’s bread from this baker.

Job Berckheyde, baptized 27 January 1630 and died 23 November 1693, was born in Haarlem and was the older brother of the painter Gerrit who he later taught to paint.

He was apprenticed on 2 November 1644 to Jacob Willemszoon de Wet. His master’s influence is apparent in his first dated canvas, “Christ Preaching to the Children” (1661), one of his few biblical scenes.

Golden-age historian Arnold Houbraken claimed that Job had been trained as a bookbinder by his father, and could not discover who taught him to paint.

What is not in doubt is that Gerrit learned from his older brother. Job’s teacher must have been a Haarlem master, and some claim it was Frans Hals, but Houbraken claimed he travelled as a journeyman between Leiden and Utrecht offering his services as a portrait painter and learned by doing.

During the 1650s the two brothers, Job and Gerrit, made an extended trip along the Rhine to Germany, stopping off at Cologne, Bonn, Mannheim and finally Heidelberg, following the example of their fellow guild member Vincent van der Vinne.

The brothers worked in Heidelberg for Charles I Louis, Elector Palatine (with Job producing portraits and hunting scenes, and receiving a gold chain from the Elector in reward) but were ultimately unable to adapt to court life and so returned to Haarlem, where they shared a house and perhaps a studio.

He could paint landscapes in the same style as his brother, but seems to have preferred interiors and genre works, whereas his brother’s oeuvre consists mostly of outdoor scenes. The Elector’s gold chain may be the one he wears in his early Self-portrait (1655), his only documented work from the 1650s.

Job is better known for his later work, which consists mainly of interior views of the Sint-Bavokerk in Haarlem and simple genre scenes recalling those of his Haarlem contemporaries Adriaen van Ostade and Jan Steen.

Less prolific than his brother, but more varied in his output, Job produced bible and genre scenes as well as cityscapes. Confusion between their works may have resulted from the similarity of their signatures, where Job’s j resembles Gerrit’s g. Job also signed his work with an H (for Hiob or Job) and with the monogram HB.

Comments Off on #FineArtFriday: The Baker by Job Adriaenszoon Berckheyde, circa 1681