#FineArtFriday: Beneath the Snow Encumbered Branches by Joseph Farquharson 1903 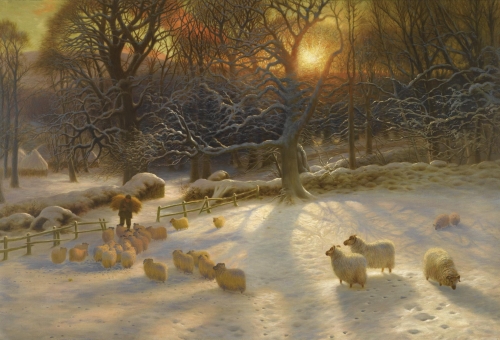 Title: Beneath the Snow Encumbered Branches

There is something haunting, a nostalgic echo of times long gone in this picture. The snow is thick and heavy, and the sheep are fluffy in their long coats. Winter has come and the shadows are long, but the conical haystacks across the lane contain plenty to last through the harshest season. The afternoon light is reflected on the snowy landscape and in the branches, a perfect golden luminosity, the hue that presages imminent dusk.

Joseph Farquharson DL RA (4 May 1846 – 15 April 1935) was a Scottish painter, chiefly of landscapes, mostly in Scotland and very often including animals. He is most famous for his snowy winter landscapes, often featuring sheep and often depicting dawn or dusk. The unusual titles of many of Farquharson’s paintings stand out and are sometimes long. Many of them were taken from poems by Burns, Milton, Shakespeare, and Gray. Farquharson was very patriotic and well versed in Scottish literature.

The remarkable realism of Farquharson’s work can be attributed to his desire to work en plein air. This had to be carried out in a unique way which was adapted to the harsh Scottish climate. Farquharson had constructed a painting hut on wheels, complete with a stove and large glass window for observing the landscape. Likewise to achieve as realistic a result as possible when painting the sheep which frequently appear in his snowscapes, he used a flock of “imitation” sheep which could be placed as required in the landscape of his choice. Farquharson painted so many scenes of cattle and sheep in snow he was nicknamed ‘Frozen Mutton Farquharson’.

Farquharson inherited the title of Laird in 1918 after the death of his elder brother Robert, a doctor and MP for West Aberdeenshire.

In 2008 the original of the 1901 painting Beneath the Snow Encumbered Branches came to light, for the first time in 40 years, when the lady owner put her house up for sale. The painting, which she had bought from a Bond Street dealer in the 1960s for £1,450, was expected to fetch up to £70,000 when it was offered for sale by auction at Lyon and Turnbull in Edinburgh. Nick Carnow, a director at the auctioneers, form said that the unnamed seller was moving to a smaller house and would not have room for the painting. In fact it sold for more than twice that estimate to another private collector in Scotland for £147,600.