One of the most valuable tools an author can have to aid them in worldbuilding is the stylesheet. It costs nothing to create but is a warehouse of information about your work-in-progress. If you’re smart, it contains a glossary of created words, names, a list of sites where you got your research, and myriad notes that relate to that novel.

The post on creating this essential tool is here: Designing the Story (includes developing a stylesheet).

If you are writing a contemporary novel or historical work set in our real world, this is where you keep maps and maybe a link to Google Earth.

The original plot and characters of Mountains of the Moon began life as a storyline for an anime-based RPG that never went into production.

I had created the maps for the game, so I knew the topography was as much an antagonist as was the ultimate threat posed by the minions of the Bull God. I had to first build and then destroy the ecology for the game because the dangerous environment and creatures capable of elemental magic are a core plot point in the story, a threat with which the protagonist must learn to coexist.

The world of Neveyah, where Mountains of the Moon is set, is an alien environment. Yet it’s familiar, based on the world I live in, the Pacific Northwest. The plants and geography are directly pulled from the forested hills of Southern Puget Sound and Western Washington State.

The foods they have available to them are primarily those available in the pre-Columbian Americas, although chickens and sheep aren’t native to this continent. I also invented plants that served as medicines and were helpful as tools or dyes.

In 2010, I wrote the proto novel of what later became Julian Lackland as my first NaNoWriMo project. I drew on the landscape around me to create the world of Waldeyn, where the Billy’s Revenge series is set. I used familiar landscape and flora, but in this case, I invented creatures born of magic. These are beasts whose predations limit travel and the ability of technology to advance beyond the waterwheel. The quest for indoor plumbing is a thorn in the side of my favorite innkeeper, Billy Ninefingers.

How do you fit the visual world into a narrative without dumping it on the reader? I try to use the scenery to show the mood and atmosphere.

Ivan drew his cloak around himself, listening to the soft rattling of branches moving with the breeze. The occasional calls of night birds went on around him, as if he weren’t full of doubt and indistinct fears, as if he didn’t exist to them. Leaves fell, brown and harvest-dry, drifting, spiraling down to the forest floor.

For a moment, he caught the faint, disgusting scent of a water-wraith and drew his blade in case he had to rouse the others. 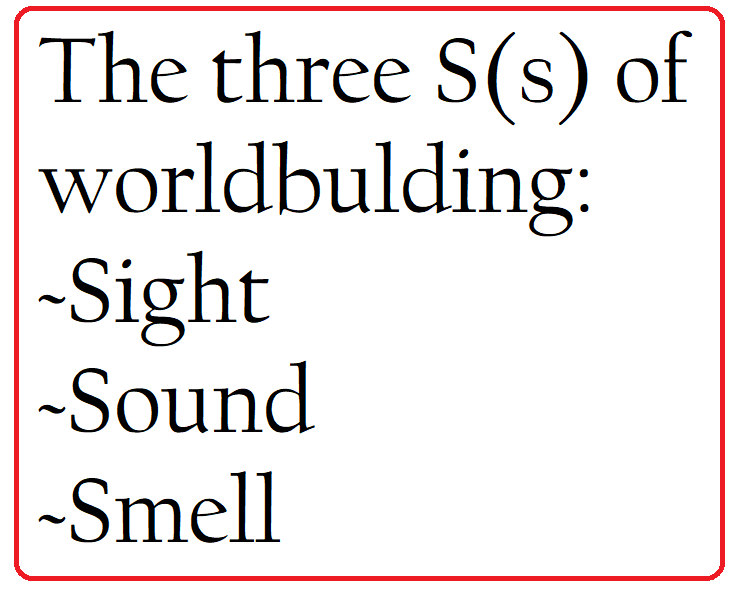 The “three S’s” of worldbuilding are critical: sights, sounds, and smells. Those sensory elements create what we know of the world. Taste rarely comes into it, except when showing an odor.

Inside the lair, the caustic atmosphere burned her eyes and throat. “Shallow breaths,” she reminded herself. The nest was huge, but Sofia climbed in and quickly grabbed the egg, slipping it inside her shirt, next to her skin. She switched the round rock into its place, positioning it as the egg had been.

Silently, she ran back to the entrance, slipping from boulder to boulder until she disappeared into the shrubbery. Once hidden in the thick undergrowth, she breathed deeply, but the metallic aftertaste of the bitter air lingered.

In my part of the world, Douglas fir and western red cedar are the most common tree species. They both can reach up to 80 – 100 meters with a trunk up to 3 meters across. Western hemlock is shorter, only 60 meters, but has a larger trunk, up to 4 meters wide. Once a familiar tree, it became less common as old-growth forests were cut down and replaced with plantations of fast-growing Douglas fir.

Modern forest management has developed an understanding of the interdependence of diverse forest species, so a more natural approach to managed forestry has evolved.

These are the native forest trees I see in the world around me, along with big-leaf maples, alders, cottonwood, and ash. This is the world I visualize when I set a story in a forest.

What makes up your written world? How does your environment affect the way your characters live?

Darkness had fallen, but the alley’s gritty pavement still radiated a low heat. Wanda raised her eyes to see the new moon high in the black velvet sky, the distant stars obscured by the glow of neon signs and halogen streetlamps.

The odors behind the Flamingo Bar and Grill offered a pungent counterpoint to the aromas of burgers and barbecue emanating from inside. Above the back door, the weak bulb flickered but remained on, illuminating the litter.

Just a few more minutes and Bill would emerge. She knelt beside the dumpster, the gun pointed, cocked, and ready.

You might believe you can’t picture a place you haven’t been. Why?

Open your eyes and look around.

At this moment, inside your room and outside your door, you have all the elements you need to create an alien or alternate world.

These elements might exist before your eyes, or they live in your memory. Use what you know.

Reshape your environment, reuse it, and make it your fictional world.

The previous posts in this series can be found here:

Up Next: Worldbuilding Part 4: Designing the Parameters of Science and Magic