All through September, we’ve focused on building our NaNoWriMo storyboard. We’re preparing the groundwork that will allow us to write 1667 new words or more every day during the month of November.

We are four weeks into this series, and we’ve compiled a long list of essential things to consider. So now, we’re going to zoom in and take a closer look at what my co-ML, Lee French, calls “the stuff that permeates everything, and how they interact.”

We have looked at designing systems for technology and magic. We know which scenario we are choosing, and we’ve figured out how it works. Now we’re going to look at how those systems are connected to the people and how they impact the way our characters live in their worlds.

Lee reminds us that in the case of technology and magic both, the most significant impact is on the efficiency of routine tasks:

“In a contemporary, real-world setting, you have everything we have now. If you want to contact someone, you can call, text, or email them.

“In many fantasy settings, magic replaces tech with a fantastical version of something, like casting a spell instead of calling, texting, and/or emailing.

“In sci-fi settings, advanced tech typically makes things faster, like having a cranial implant that eliminates the need to type–all you do is ‘think’ and it happens. Maybe there aren’t voice calls anymore, and everything happens by text.

“In low-tech, no-magic settings, things take longer to accomplish. There is no phone, so you have to write a letter or go visit someone in person.”

Just because some technology exists doesn’t mean everyone has access to it. 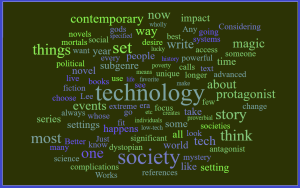 Think about the subgenre of cyberpunk: it encompasses many features of hard science fiction and the dark anarchy of classic Sturm und Drang but is set in a dystopian society. The religions people worship are technology and industry. Corporate uber-giants are the gods whose knowledge mere mortals desire and whom they seek to replace. Recreational drugs are the magic potions, and technology is the superpower mortals desire to wield.

And, just like all demi-gods in classical mythology, when a powerful and clever protagonist does manage that feat, nothing changes for mere mortals. The new gods are no better than those whose thrones they have usurped.

Wikipedia defines cyberpunk: Cyberpunk is a subgenre of science fiction in a future setting that tends to focus on the society of the proverbial “high tech low life”  featuring advanced technological and scientific achievements, such as information technology and cybernetics, juxtaposed with a degree of breakdown or radical change in the social order.” [1]

Works in this subgenre are always set in a post-industrial dystopian world with deep divisions in the strata of society. Some have a specified caste system, but most people live in extreme poverty in all cyberpunk tales. There will be a small middle class, and at the top, a few of the most powerful people hold incredible wealth. These societies have fallen into extreme chaos, which is the driver of the story.

Protagonists acquire and use technology in ways never anticipated by the original inventors. A central element of cyberpunk is “the street finds its own use for things.”

So, now we understand that privilege, or lack thereof, shapes a person’s place in society, no matter what genre you choose to best tell your story. How does the protagonist see themselves in relation to the antagonist? Better than, as good as, or beneath but clawing their way up?

Who are these characters when they’re home? Write a paragraph or two introducing them to you, showing them as they are when no one is looking. Do they cook, clean, answer messages, etc.? What tech/magic are they comfortable interacting with on a daily basis? Get this out of the way now, so it doesn’t make an appearance in the narrative as an unnecessary info dump later.

Considering these things now can speed things up when you plot your opening scene. You’ll see your characters fully formed in their comfort zone and know who they are and how they think. When you write those first lines, you will have no trouble seeing them as unique individuals.

If you are writing a novel set in our contemporary world, most of the work is already done. Your concerns should focus on the specifics of where your story takes place and the opinions of your characters.

If you choose to include contemporary politics, events, and tech, keep in mind that your novel will no longer be current in ten years. It will recount a history that recedes further into the past every year.

That is NOT a bad thing, not by any means.

One of my favorite genres to read for pleasure is mystery. I have always enjoyed the characters in the Gregor Demarkian series by the late Jane Haddam. These novels were set firmly in the political climate of the 1990s and early 2000s, the era in which most books in the series were written.

While references to technology and political events date these books (as do the religious and social complications), great characters, murder, and the mystery of why it happens are timeless.

These novels are compelling despite the advances in today’s technology and the changes in the way society sees itself. The characters are engaging, and the worldbuilding creates a solid, believable image of 1990s Philadelphia.

If you are setting your story in a historical era, remember that sometimes the events of one year can change everything about a society.

If your story is set in a specific year with significant events that changed everything for whole societies, take some time to think about whether you want it before or after the incidents. Think about how those events impact your characters.

I would say that 2019 was a vastly different time than 2021. Any novel set in contemporary 2021 will have societal aspects and complications that are wholly unique to this time and this world and very different from one set in that long-ago-time of 2019.

12 responses to “#NaNoPrep, Connections and Interconnections”