Aert van der Neer, or Aernout or Artus (c. 1603 – 9 November 1677), was a landscape painter of the Dutch Golden Age, specializing in small night scenes lit only by moonlight and fires, and snowy winter landscapes, both often looking down a canal or river.

This image offers us context to history. It shows how a 17th century harbor looked and the people who worked there. Carters and haulers move cargo, and fishermen go out in the dark to fish for a living. Some freshwater fish, such as eels, are more commonly found after dark. 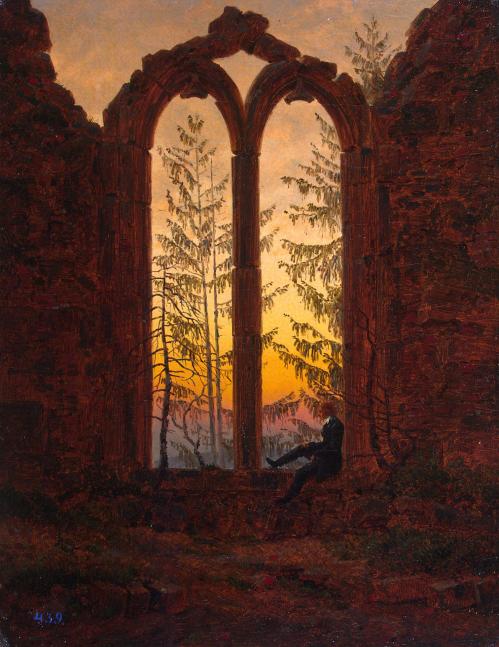 This is a mystical, fairy tale place, painted by a man who believed in fairy tales. As was his habit, he took the image of a place  he knew, Oybin Castle, and turned it into a world apart. This is a thing genre authors regularly do – like fantasy painters we take what we know and reshape  it into something wonderful.

This particular view didn’t exist in this exact form, ever. But it did in his mind, and he painted it, placing himself in the middle of it. The smallest details of the perfect trees combined with the broad red coloration of the walls and the dusk-red of the sky to create the image of a moment he wished for, an hour of serenity.

Sunset, the hour of twilight, is a powerful moment, a time of transition between the worlds. We move from the world of daylight to the world of darkness. The same moment of spiritual power occurs at dawn. Fantasy painters are like authors, capable building a fantasy world in one image.

Friedrich found his happy place in the fantasy worlds he painted.

Caspar David Friedrich (5 September 1774 – 7 May 1840) was a 19th-century German Romantic landscape painter, generally considered the most important German artist of his generation. He is best known for his mid-period allegorical landscapes which typically feature contemplative figures silhouetted against night skies, morning mists, barren trees or Gothic ruins. His primary interest was the contemplation of nature, and his often symbolic and anti-classical work seeks to convey a subjective, emotional response to the natural world. Friedrich’s paintings characteristically set a human presence in diminished perspective amid expansive landscapes, reducing the figures to a scale that, according to the art historian Christopher John Murray, directs “the viewer’s gaze towards their metaphysical dimension.”

English: Ruins of the Oybin (Dreamer)

This week, for some reason I have been quite interested in Vincent van Gogh’s earlier work.  This painting is the earliest from his art-book, which is dated 1881. The mediums he used in this study were black chalk, charcoal, grey wash, and opaque watercolor on laid paper, a type of paper having a ribbed texture, that is especially good for watercolors.

I have been contrasting the preciseness of this early work with his later expressionism and imagery. I’m fascinated with the evolution of his choice of colors, from muted, yet somehow intense, in his early work, to brilliant and vibrant in his later pieces. In a way, it’s like reading the early works of a favorite author. You see everything you love about their work in that book written in their youth, but greatly admire the way their voice and style evolves in their later, more mature work.

Fortunately, Van Gogh was a prolific writer of letters, many of which have survived. Through his correspondence with his brother Theo Van Gogh, and to Anton van Rappard, a Dutch painter and draughtsman, we have a window into Vincent’s life.

Quote from Wikipedia: Theo kept all of Vincent’s letters to him;[10] Vincent kept few of the letters he received. After both had died, Theo’s widow Johanna arranged for the publication of some of their letters. A few appeared in 1906 and 1913; the majority were published in 1914.[11][12] Vincent’s letters are eloquent and expressive and have been described as having a “diary-like intimacy”,[9] and read in parts like autobiography.[9] The translator Arnold Pomerans wrote that their publication adds a “fresh dimension to the understanding of Van Gogh’s artistic achievement, an understanding granted us by virtually no other painter”.[13]

There are more than 600 letters from Vincent to Theo and around 40 from Theo to Vincent. There are 22 to his sister Wil, 58 to the painter Anthon van Rappard, 22 to Émile Bernard as well as individual letters to Paul Signac, Paul Gauguin and the critic Albert Aurier. Some are illustrated with sketches.[9] Many are undated, but art historians have been able to place most in chronological order. Problems in transcription and dating remain, mainly with those posted from Arles. While there Vincent wrote around 200 letters in Dutch, French and English.[14] There is a gap in the record when he lived in Paris as the brothers lived together and had no need to correspond.[15]

Vincent’s comments regarding this picture, as quoted on Wikmedia Commons:

Letter 172 to Theo van Gogh. Etten, mid-September 1881. Vincent van Gogh: The Letters. Van Gogh Museum. “Prompted as well by a thing or two that Mauve said to me, I’ve started working again from a live model. I’ve been able to get various people here to do it, fortunately, one being Piet Kaufmann the labourer… Diggers, sowers, ploughers, men and women I must now draw constantly. Examine and draw everything that’s part of a peasant’s life. Just as many others have done and are doing. I’m no longer so powerless in the face of nature as I used to be.”

Letter 178 to Anthon van Rappard. Etten, Wednesday, 2 November 1881. Vincent van Gogh: The Letters. Van Gogh Museum. “Today I again drew a digger, and since your visit a boy cutting grass with a sickle as well.”

Aert van der Neer, or Aernout or Artus (c. 1603 – 9 November 1677), was a landscape painter of the Dutch Golden Age, specializing in small night scenes lit only by moonlight and fires, and snowy winter landscapes, both often looking down a canal or river.