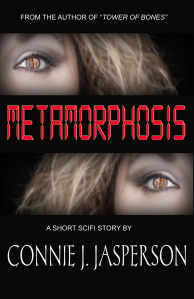 Yrena Rozhenko ran, not knowing if she was headed into something worse.  It didn’t matter—the transformation had begun and she couldn’t seem to halt it. One way or the other she had to get away from Benton.

The sounds of distant pursuit penetrated to her newly-altered hearing, spurring her on.

She took to the foliage. The shade and mottled light of the strange underbrush eased the pain in her eyes, dimming the glare. She raised her hand to her face, wondering why it felt so bruised. Hard nobs had begun to form above her eyebrows, turning them in ridges. Her heart nearly stopped when she saw the scales forming on her hands and long, deadly-looking talons where neatly manicured fingernails once had been.

What’s happening to me? We ate nothing and drank no water from this world. We touched nothing ungloved. Could it be the air?

Their mission was over. In the UFA records, they would be officially listed as MIA, something that happened frequently on first exploration missions. Benton had murdered Jackson. Jenner was either dead or in hiding, and she…she was changing into some…thing.

Was she going to die next? Benton’s fear and loathing of anything different made him…the only word she could think of was evil.

Why had he not begun to change? The answer came from all around her, from the forest. I was waiting for you. He is not worthy.

She heard Benton softly call her name, a sing-song taunt. “Rozhenko…come out, come out, wherever you are….”

What could she do? With those talons on her hands she wouldn’t be able to return to the ship, even if she could make it to the lander. Besides, she couldn’t leave without knowing if Jenner was alive, and if he was, she wouldn’t leave him behind.

And even if she made to the ship, what then? She knew the change was happening to her on a genetic level, as if this planet had claimed her. Something told her it was irreversible.

Gods, her back ached.  Her shoulder blades, her tailbone were like points of…gah! Whatever. She had to ignore it and get deeper into the brush.

Jackson had begun to change the first night. By dawn he’d transitioned into something…else.

The others had discussed his condition, deciding to take him back to Lodestar Station where the medical team was, despite it being a ten-day journey and meaning the end of their mission. They would have to declare Sirius C a class N Biohazard planet, meaning the established ecology was too dangerous for human settlement.

Benton had been the lone holdout, shouting they had to destroy Jackson before he destroyed them. “He’s a killer. Look at those claws—he’s not human anymore!”

When Yrena and Jenner shouted him down, he had walked up behind Jackson and shot him in cold blood, with no further conversation or discussion, murdering the man who’d been their commander with no qualm or shame.

He’d been proud that he’d done so and now claimed Jackson’s position as expedition leader.

Jenner had begun to change right after Benton murdered their commander, but he’d vanished while Yrena was in the shuttle sending the message detailing the hazard and Benton’s mutiny.

Yrena feared that Benton had killed Jenner while she was busy, but if he had, the body was nowhere to be found.

Benton had shown his true colors. He’d always bragged that he had what it took to rise to the top. He was a capable enough navigator and a solid geologist, but he’d never understood finesse or compassion. How he’d been put on their team in the first place, she didn’t know, but he’d been nothing but a sour pain in the…ass.

She suppressed a groan. Even her ass ached. She was afraid to reach back there and see why.

Some new instinct told her to get off the ground, that safety was in the tree-tops. Yrena’s new talons made excellent assists for rapid tree climbing. Perched high in the canopy and hidden by the triangular, golden leaves, she watched as Benton combed the forest floor, not even thinking to look up.

She had burst out of her shipsuit, which was now nothing but shreds. Carefully she balled it up and hid it in the hollow of the tree. She could nest there if she had to.

What was she thinking? She had to get back to…what was that? A glint of gold caught her eye. A gold-mottled form was perched on a branch near her, one sharp-taloned finger held to his scaly lips for silence. Relief swept through her—Jenner had completed the transformation.

She was not alone.

Benton passed under their tree. Yrena clung tightly to the trunk, remaining perfectly still. She needed a few more hours to complete the transformation, but if he looked up, she would never know what she was transforming into, never again know love or laughter or….

Jenner flew back up to perch beside her.  She let go of the trunk and went to sit beside him, their arms going around each other.

They had been colleagues but she’d not really known him well. He was all she had now.

The setting sun cast a ray that glanced off the abandoned shuttle. Above the forest, stars began to come out and a tiny star passed overhead. Once it had been a research vessel, but now it was an abandoned hulk ending its days as a small star in a new sky.

Metamorphosis was first published July 10, 2015 on Edgewise Words Inn under the title “Transfiguration”

It was republished on Oct. 18, 2015 on WattPad under the title “Metamorphosis”

Comments Off on #Flashfic: Metamorphosis

I have been catching up on my long-put off reading, starting with a book by fellow Northwest indie author Sechin Tower, Mad Science Institute . I had a great time reading this particular YA novel. But first, The Blurb:

Sophia “Soap” Lazarcheck is a girl genius with a knack for making robots—and for making robots explode. After her talents earn her admission into a secretive university institute, she is swiftly drawn into a conspiracy more than a century in the making. Meanwhile and without her knowledge, her cousin Dean wages a two-fisted war of vengeance against a villainous genius and his unwashed minions. Separately, the cousins must pit themselves against murderous thugs, experimental weaponry, lizard monsters, and a nefarious doomsday device. When their paths finally meet up, they will need to risk everything to prevent a mysterious technology from bringing civilization to a sudden and very messy end.

My Opinion: This book totally lives up to it’s promise. Soap is a great character, and so is Dean.  She is a little too adventurous in the laboratory, and things sometimes go awry. The story opens with her, and immediately shifts to Dean’s story, but shifts back again.

Dean is older, is a firefighter who loves his work, and has relationship issues, which launch him into the thick of things.

Soap is a feisty girl, who is launched into a series of immersive adventures. She’s a bit testy and awkward when it comes to interpersonal relationships.

The author, Sechin Tower, is a teacher in his real life, and I think he must be pretty awesome in the classroom, because the story contains a lot of historical information imparted in regard to Nicola Tesla and his scientific legacy, presented in such an entertaining way the reader doesn’t realize they’re learning.

All in all, I have three grandkids who would really enjoy this book–and Santa will be obliging this year!

Comments Off on #amreading: Mad Science Institute, by Sechin Tower