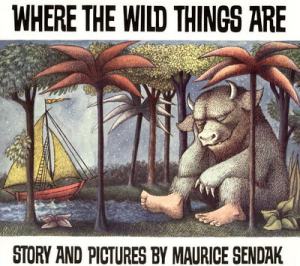 The art and philosophy of both Maurice Sendak and Dr. Seuss shaped my young life as an author and as a reader.  It was through reading their wonderful works to my younger siblings that I developed my love of reading aloud.

When you read aloud, you share the experience of the tale with another person, and their enjoyment of the tale increases your own.

At least, that is how I see it, and to this day I enjoy reading a book aloud to my family.

I didn’t start out wanting to read to my little sibs–it was forced on me. I really wanted to be left alone so I could read my stolen volumes from Dad’s bedside library–Bradbury, Asimov, M.A. Foster, Phillip K. Dick–the great pioneers of speculative fiction resided in that overburdened bookshelf, and I spent my pre-teen years inventing ways to sneak in and snag a book without getting caught. Simply entering the room where the shelf was enshrined was a crime worthy of the supreme punishment, so I developed crafty ways to liberate a book, and return it–feeling somewhat like Bond as I did so. (Mother was a Bond girl–along with steamy Jacqueline Suzanne novels.) (Ewww.) (Until I hit the age of about 14.) (Everything I know about sex I learned from my mother’s bedside library.) 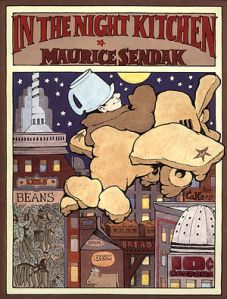 It was the mid 1960’s. My parents were a typical post-war couple. Dad was a disabled vet and worked as a draftsman, earning a good income, and Mom was an unhappy, bored housewife who hated being a stay-at-home mom. My maternal grandmother lived with us, and to say we lived in a pressure cooker, sometimes, would be an understatement. As the oldest one in that batch of kids, it was my job to entertain the younger siblings.

I wasn’t always kind about it, but once I got into the swing of things, it was fun. In those days, TV was a privilege, not a right. We only had 3 channels, which were boring. But the best way for me to “keep those kids quiet” was to read a story, and we all loved stories with great pictures. Maurice Sendak’s fun, fantastic art fired the mind, for sure.

I still see very little television. I don’t have that connection, that invisible tether that others seem to have to the electronic mind-wipe device. I get quite bored with the predictable storylines and redundant catch-phrases that permeate the airwaves.

Where the Wild Things Are is a song of  childhood rebellion,  just 338 words. It focuses on a young boy named Max who, after dressing in his wolf costume, wreaks such havoc through his household that he is sent to bed without his supper. (I did the same, many, many times–sans the wolf costume. Costumes were a bother, and were not encouraged in our house.) Max’s bedroom undergoes a mysterious transformation into a jungle environment, and he winds up sailing to an island inhabited by malicious beasts known as the “Wild Things.” After successfully intimidating the creatures, Max is hailed as the king of the Wild Things and enjoys a playful romp with his subjects; however, he decides to return home, to the Wild Things’ dismay. After arriving in his bedroom, Max discovers a hot supper waiting for him–which I never did.

Being forced to be kind to my younger siblings didn’t hurt me at all. In fact it forged an alliance, three angry, rebellious children against the often capricious adult world of the 1960’s. When everything else was going to hell in our outwardly perfect world, we had each other, and we had our books.