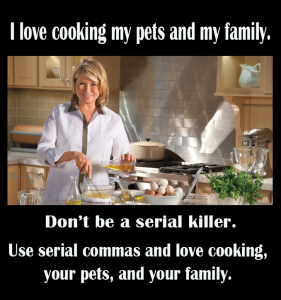 Commas: those little morsels of goodness that few authors understand. In general, serial commas are used to resolve ambiguity. When we have a list in a sentence, not using commas can create some interesting situations.

Comma use is part of what we call ‘style:’

We use a style to ensure consistency in our phrasing and punctuation, and make it easier for the reader to enjoy the book. The books I use to help me with that are Elements of Style, the Chicago Manual of Style, and the Oxford A-Z of Grammar and Punctuation.   In my opinion, as an avid reader, the style that always uses the serial comma is less likely to result in ambiguity. Consider the legendary book dedication often attributed to Teresa Nielsen Hayden:

To my parents, Ayn Rand and God. 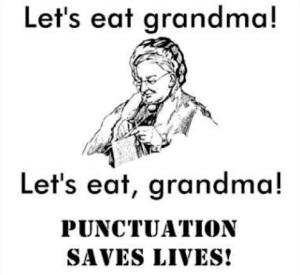 However, a comma before and removes the ambiguity: To my parents, Ayn Rand, and God.

But lists can also be written in other ways that eliminate the ambiguity without introducing the serial comma, such as using other punctuation, or none, to introduce or delimit them. For example, in the following manner:

To God, Ayn Rand and my parents. Hemingway used and in place of commas in much of his work, and it was quite readable.

A famous example reportedly collected by Nielsen Hayden was found in a newspaper account of a documentary about Merle Haggard:

Although Merle Haggard has been married five time, he was never married to either Kris Kristofferson or Robert Duvall,  and a serial comma would resolve that inaccuracy:

Among those interviewed were his two ex-wives, Kris Kristofferson, and Robert Duvall. 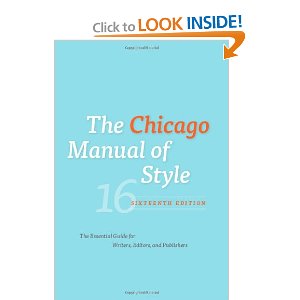 I’ve seen people launch into rants  against serial commas, claiming that it’s too many and looks awful.

I’m just going to say that argument  is hogwash.

Who are your writing for, yourself or an unknown reader who may one day buy your book?

If you are writing for your own eyes only, do whatever you like.

But if you expect others to enjoy your work, you need to think about the reader: consider what is going to make your work easy for the reader to understand what you are saying.

Other aspects of commas may escape me at times, but the serial comma, also known as the Oxford comma, is one I adhere to in my own work, and heartily wish other authors would too.