#amwriting: the role of the #proofreader 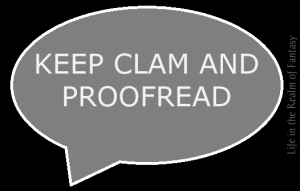 I am nearly at the end of the editing process on my new novel, Billy Ninefingers, a tale set in Huw the Bard’s world. When I am finished with the revisions, I will format my manuscript to be uploaded as both eBook and paper books. At that point, I will be looking for proof readers.

This is where it gets sticky. At some point, I must draw the line and say this book is done. I want no more changes, no more fiddling with it. Thus, when the manuscript is as polished as I can possibly get it, I have one final step—the one that can either ruin a formatted manuscript or make it great: proofreading.

While some people will dispute this, proofreading is not editing.

Proofreading is done after the final revisions have been made, and hopefully it is done by someone who has not seen the manuscript before. That way, they will see it through new eyes, and the small things in your otherwise perfect manuscript will stand out.

Anita Campbell, in her May 28, 2015 guest post for the SBA’s Blog-Industry Word says: “The first step of effective proofreading is understanding that not every typo or issue is alike.  Each needs to be attacked in a different way.” While she is speaking of editing blogposts, and short works, that profoundly true of longer manuscripts.

Even though an editor has combed your manuscript and you have made thousands of corrections, both large and small, there may be places where the reader’s eye will stop. Words have been left out, punctuation is missing–any number of small, hard-to-detect things can occur even after the most thorough of edits.

After the final edit, we go over our work with a fine-toothed comb, trying to proof it ourselves. We read it aloud, and we read it from the bottom up, but our eye sees what it expects to see. We catch many things, but we don’t catch it all.

This is where the final person in the process comes in–the proofreader.

In case you didn’t see it when I mentioned it above, I will say it again: proofreading is not editing. Editing is a process that I have discussed at length elsewhere, and is completed long before we get to the proofreading stage.

At the outset, the proofreader must understand that no matter how tempting it may be, they have not been invited to edit the manuscript for content. That has already been done and done again. If they cannot refrain from asking for large revisions regarding your style and content, find another proofreader.

What the Proofreader Should Look For:

Spelling—misspelled words, and homophones (words that sound the same but are spelled differently). These are words that spell-checker may or may not catch, so a human eye is critical for this.

Repeated words and cut-and-paste errors. These happen when making revisions, even by the most meticulous of authors, and the editor won’t see any errors you introduce after they have completed their work on the ms. These are insidious and difficult to spot, and spell-checker won’t find always them. Sometimes they seem like unusually garbled sentences.

Numbers that are digits:

Each time you (or a well-meaning editor) tweak the phrasing or create a new passage in your already edited manuscript, you run the risk of creating another undetected error.

Do not ask an editor to proofread your manuscript, as they will be unable to resist tweaking the phrasing and will ask for more changes, because it’s their nature and their job. This can go on forever, and you run the risk of

1. Ironing the life out of your manuscript and losing the feeling of spontaneity, making it feel contrived.

2. Putting up a manuscript that looks unedited because of the flaws that were introduced in the proofing process.

Don’t allow someone else, even an editor, to make the changes for you. Editors are human and can inadvertently make mistakes—after all, the eye sees what the author thinks should be there. Any person who makes changes to the final product has the chance to inadvertently ruin it.

At some point your manuscript is done. You have been through the editing process, and the content and structure is as good as you can get it, but you need one last eye looking for small flaws. Before you upload that masterpiece to Kindle or wherever, do yourself a favor and have it proofread by an intelligent reader, who understands what you are asking them to do and who is willing to do only that.

Tagged as #Proofreading is not editing, proofreading, the publishing process, what a proofreader should look for, writing

7 responses to “#amwriting: the role of the #proofreader”