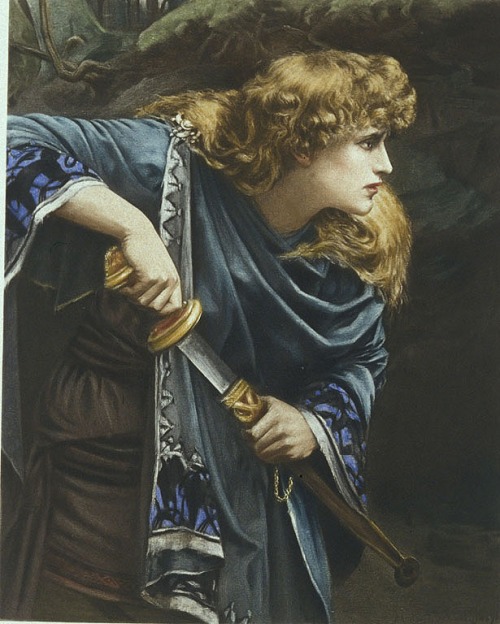 The Pre-Raphaelite Brotherhood produced some spectacularly beautiful work, as well as some rather awkwardly posed, overly sentimental pieces. Schmalz was famous for his romantic pictures depicting medieval scenes, Arthurian scenes, and vignettes from Shakespeare’s work.

Schmalz turned his brush to portraiture in his later work, as that was where the money was.

The Pre-Raphaelite Brotherhood (later known as the Pre-Raphaelites) was a group of English painters, poets, and critics, founded in 1848 by William Holman Hunt, John Everett Millais and Dante Gabriel Rossetti. The three founders were joined by William Michael Rossetti, James Collinson, Frederic George Stephens and Thomas Woolner to form the seven-member “brotherhood”. Their principles were shared by other artists, including Ford Madox Brown, Arthur Hughes and Marie Spartali Stillman.

A later, medievalising strain inspired by Rossetti included Edward Burne-Jones and extended into the twentieth century with artists such as John William Waterhouse.

The group’s intention was to reform art by rejecting what it considered the mechanistic approach first adopted by Mannerist artists who succeeded Raphael and Michelangelo. Its members believed the Classical poses and elegant compositions of Raphael in particular had been a corrupting influence on the academic teaching of art, hence the name “Pre-Raphaelite”. In particular, the group objected to the influence of Sir Joshua Reynolds, founder of the English Royal Academy of Arts, whom they called “Sir Sloshua”. To the Pre-Raphaelites, according to William Michael Rossetti, “sloshy” meant “anything lax or scamped in the process of painting … and hence … any thing or person of a commonplace or conventional kind”.[1] The brotherhood sought a return to the abundant detail, intense colours and complex compositions of Quattrocento Italian art. The group associated their work with John Ruskin,[2] an English critic whose influences were driven by his religious background.

The group continued to accept the concepts of history painting and mimesis, imitation of nature, as central to the purpose of art. The Pre-Raphaelites defined themselves as a reform movement, created a distinct name for their form of art, and published a periodical, The Germ, to promote their ideas. The group’s debates were recorded in the Pre-Raphaelite Journal.