#FineArtFriday: The Huis Kostverloren on the Amstel by Jacob van Ruisdael ca.1660 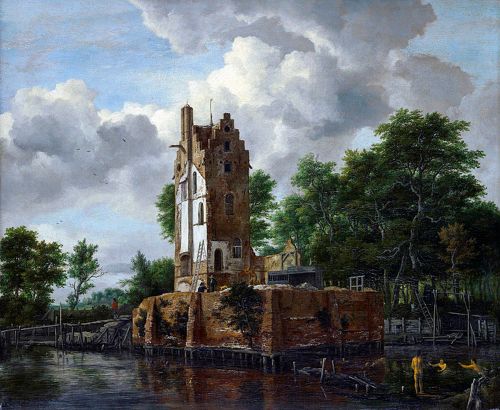 About the Artist Via Wikipedia:

Ruisdael and his art should not be considered apart from the context of the incredible wealth and significant changes to the land that occurred during the Dutch Golden Age. In his study on 17th-century Dutch art and culture, Simon Schama remarks that “it can never be overemphasized that the period between 1550 and 1650, when the political identity of an independent Netherlands nation was being established, was also a time of dramatic physical alteration of its landscape”. Ruisdael’s depiction of nature and emergent Dutch technology are wrapped up in this. Christopher Joby places Ruisdael in the religious context of the Calvinism of the Dutch Republic. He states that landscape painting does conform to Calvin’s requirement that only what is visible may be depicted in art, and that landscape paintings such as those of Ruisdael have an epistemological value which provides further support for their use within Reformed Churches.

The art historian Yuri Kuznetsov places Ruisdael’s art in the context of the war of independence against Spain. Dutch landscape painters “were called upon to make a portrait of their homeland, twice re-won by the Dutch people – first from the sea and later from foreign invaders”. Jonathan Israel, in his study of the Dutch Republic, calls the period between 1647 and 1672 the third phase of Dutch Golden Age art, in which wealthy merchants wanted large, opulent and refined paintings, and civic leaders filled their town halls with grand displays containing republican messages.

Title: English: The Huis Kostverloren on the Amstel

3 responses to “#FineArtFriday: The Huis Kostverloren on the Amstel by Jacob van Ruisdael ca.1660”