Mountains of the Moon Launches 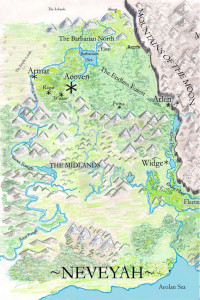 Mountains of the Moon is the newest release in the World of Neveyah. It is set in the same world as the Tower of Bones series but it is the original story that was written as the storyline for an old-school RPG game, along the lines of the early Final Fantasy games.

A prequel to Tower of Bones, the book follows the adventures of Wynn Farmer as he and his companions travel high into the mountains to stop the Tauron, Bull God, and his minotaurs from overrunning Neveyah. Nothing goes as it’s supposed to, and Wynn’s general naiveté often causes his companions serious trouble. 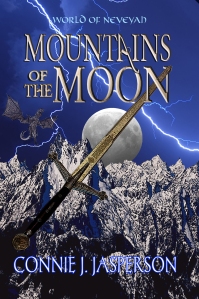 Wynn is seriously ignorant of the world in general, and at the outset, he’s in over his head, and he knows it. This book also introduces several characters as young men,  two of whom play a large role in the Tower of Bones series, Rall Ivarsson, and Jules Brendsson. Both these men figure strongly in later books, and at the time of Tower of Bones, Rall occupies the office of the Holy Seat, guiding the Temple of Aeos, and is the most powerful man in Neveyah.

Wynn’s story is sometimes hilarious and was fun to write–a contrast against the frequently dark situations they find themselves in. The world of Neveyah is a harsh place at times. Magic is a fundamental facet of life there, and many of the magical creatures that inhabit the world are just as deadly as the minotaur hordes of the Bull God.

Charged by the goddess Aeos, Wynn and his companions bicker and bumble their way through the Mountains of the Moon. Danger, mystery, and dark prophecies chase them through a gauntlet of jagged peaks and deadly traps.

Can they survive the dark secret hidden in Tauron’s crumbling castle before his minotaurs overrun Neveyah?

The Gods are at war, and Neveyah is the battlefield.

Mountains of the Moon is on sale at these fine online stores for $2.99 ebook and $17.99 for paperbook:

Barnes and Noble for Nook or paperback

Amazon.com for Kindle or paperback

Also available at SmashWords in a variety of ebook formats for your phone or tablet!

FOR CARLIE M.A. CULLEN’S REVIEW OF MOUNTAINS OF THE MOON, CLICK HERE Wow! She liked it!

And also, a reminder that I will be signing books at AFK Elixers and Eatery all afternoon and evening tomorrow, Saturday the 27th of June, 2015. Please–feel free to stop in and chat! I will be there with local authors AJ Downey, Sechin Tower, Lee French,  Lindsay Schopfer, Stephen Matlock, David Moore and Jeffrey Cook.

Comments Off on Mountains of the Moon Launches

Writing is going well. I’m fleshing out the third book in the Tower of Bones series. The prequel to the Tower of Bones series, a stand-alone novel, Mountains of the Moon,  is in the final stages of production and will be published in July. I’ve also been working on some short stories in the Billy’s Revenge series, follow-ups for Huw the Bard. The re-write of The Last Good Knight went well, and the rough draft is now resting on the back-burner while I finish up the third book in Edwin Farmer’s story,Valley of Sorrows. VOS is nearly complete, and will be my main area of focus for the next three months.

Valley of Sorrows picks up where Forbidden Road left off, and is a rather dark book, although there are some moments of hilarity. We will see a great deal more of Stefyn D’Mal, and find out what sort of person Lourdan is. Valley of Sorrows will finally take Edwin home, but what waits for him when he arrives back in Aeoven? We should know by next spring!

Set concurrently with Forbidden Road is John Farmer’s story, The Wayward Son. That book deals with the issues of PTSD, survivor guilt, and what happens to the men and women who return from the war. Some wounds are not visible from the outside, and John Farmer’s story takes us deep into that aspect of a soldier’s life.

One reason writing has been so slow on Valley of Sorrows was that I had to write John’s story, so the book would make sense–so I have been writing two books.  I’ve always known John’s background, but his back-story has always remained just that–reams of untold back-story.

John, Garran, and Halee have some serious issues to overcome stemming from a series of traumatic incidents that occurred during the last days of the war in Mal Evol. Twenty five years have passed, but for each one of the three who were once so close, some scars have never healed, and John’s return to Neveyah reopens the wounds. While those problems are hinted at, they’re not discussed in Forbidden Road. In order for John and Garran to be at Braden, waiting for Edwin and ready to join the quest, I had to resolve some of those long-festering issues.

Also, several things occurred in Aeoven during Edwin’s absence, things that set him on a different course. These things are explored in the course of John’s story, and that book, The Wayward Son, will be published right around the same time as Valley of Sorrows.

During the re-editing of Tower of Bones I took the liberty of changing one character’s name. She is briefly mentioned in that book, but her part really very minor. However, she assumes a somewhat larger role in Forbidden Road, which caused some problems, as her name was only one letter off from another female character’s name, and they rhymed.

At the time I first published Forbidden Road, I was concerned about the names being so similar, but I didn’t know what to do about it. But it occurred to me that since I am an indie, I can do any thing I want, so I went ahead and changed the abbess’s name to Halee. The simple expedient of changing her name from Marta to Halee ensures she doesn’t rhyme with Marya.

So my writing life has been quite full–when I run out of ideas on one story I pull out another and work on it until it’s time to move on to a different one. My books have new interiors, new maps, and new covers. They are back on the shelves for sale, and the sequels and prequels are moving along just fine.  My writing life is good!

Strapping the Monkey to the Typewriter and Selling His Work 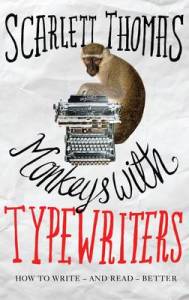 At times, creativity seems to fail. We’ve become bored with the work we’re doing and need some new thing to spark that creative genius lurking deep within our coffee-addled brains (or wine-soaked, as the case may be.) An infinite number of monkeys strapped to IBM Selectrics, industriously typing out Shakespeare could do better.

For myself, the way to beat this is to write something, anything–even if it doesn’t pertain to my major work in progress. The best part of being an indie is that you can write in whatever direction the mood takes you.

And that is how Huw the Bard  came about. I was supposed to be working on Forbidden Road, but I had become bogged down. NaNoWriMo came along and Huw grabbed me by the imagination and away we went.  This jump-started my mind on the other book too, so I wrote on both books for the next year. Forbidden Road was finished, edited and published in 2013

Now Huw the Bard has been published and I am working on Valley of Sorrows. In the meantime I have to find ways to publicize my work, and since we just acquired a hefty car payment, it must be affordable. (As in CHEAP.)

In other posts I have discussed the importance of getting Twitter, LinkedIn, Goodreads, Pinterest, Facebook and Google+ profiles created. You must also have your Author Central profile put together on Amazon and one for Smashwords, Barnes and Noble and any other major online place you sell your works.

Today, I want to say that Facebook is fun, and a great place for a free launch party. We had a great time with that, and I do think it helped sell books.  But you need a sustainable place to put your work, and Facebook is no longer that great a venue for selling books.  I’ve had better luck through blogging, if the truth be told.  My good friends helped get Huw the Bard off the ground with their blogs and tweets.

Also, Facebook won’t allow your posts to be seen by many people unless you pay them. They call it ‘Boosting’ the post. I have done that on occasion, and  for 30.00 I sold 3 books.  That is a terrible return on investment.

I was directed by Aura Burrows, who writes the hit series, “The Cold” on www.BigWorldNework.com, to an interesting and free website run by a friend of hers. It is called The Story Reading Ape Blog and I have gone to the “contact me” page and followed the instructions. It is free, and Chris is awesome as a person–he is very sincere about helping indies get their work seen. I will keep you posted as to how that goes for me, and if you want to try it yourself, please feel free to click the link and go for it.

There are many venues–blog hops,  paid ads on Goodreads and Google–all of which I will be doing over the next year. Paid ads are tricky–the ones I can afford are not that big or prominent so perhaps they aren’t a good investment. However, there are many affordable indie book websites who will sell you ad space for $30.00 to $50.00 a whack–a sum that is doable for me if I give up Starbucks for my craft.

So now begins my real push to get my work out there–to make it visible so readers will see it and want to know what it’s about.  I have to push Tales From the Dreamtime as well as Huw the Bard, because I have that wonderful narrator, Craig Allen, depending on me to sell our audio-book! I’m selling a few books here and there, but I’ll be posting about which venues were most successful as the year progresses.

The real trick will be to get the work out in the public eye without spamming and alienating my friends.