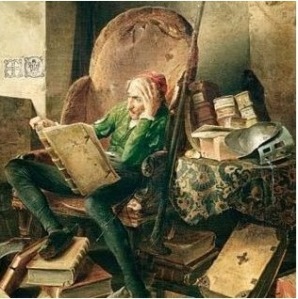 Don Quixote in the library by Adolf Schrödter 1834

Lately I have been on a Don Quixote binge. Published in two volumes, in 1605 and 1615, volume I, The Ingenious Gentleman Don Quixote of La Mancha, and volume II, The Ingenious Knight,  written by by Miguel de Cervantes Saavedra, is considered the most influential work of literature from the Spanish Golden Age and the entire Spanish literary canon (a body of books traditionally accepted by scholars as the most important and influential in shaping culture.)

As a founding work of modern Western literature,and one of the earliest canonical novels, it regularly appears high on lists of the greatest works of fiction ever published, such as the Bokklubben World Library ( a series of classical books, mostly novels, published by the Norwegian Book Club since 2002) collection which cites Don Quixote as authors’ choice for the “best literary work ever written.” It is also said that the two parts of this masterpiece have been  translated into more languages than any book other than the Bible.

Don Quixote had major influence on the literary community, as shown by direct references in Alexandre Dumas‘ The Three Musketeers (1844) and Mark Twain’s Adventures of Huckleberry Finn (1884).

Alonso Quixano, the protagonist of the novel (though he is not named until much later in the book), is a retired country gentleman nearing fifty years of age, living in La Mancha with his niece and housekeeper. Although he is mostly a rational man, his excessive reading of books of chivalry has produced a skewed view of reality and what we might consider dementia. In keeping with the theories of the time, not sleeping adequately–because he was reading–has caused his brain to dry. (I LOVE that!) As a result, he is easily given to anger and believes every word of these fictional books of chivalry to be true.

Don Quixote’s niece commits, what is to me, the most heinous crime–she and the Parrish curate burn his library, and lie to him, telling him it was the work of an evil magician. Criminal!!!

He decides to become a knight-errant in search of adventure. To these ends, he dons an old suit of armor, renames himself “Don Quixote”,  and renames his poor old horse “Rocinante.” Cervantes was a genius when he penned the horse–Rocinante is not only Don Quixote’s horse, but is a reflection of Don Quixote himself, ungraceful, past his prime, and in way over his head.

Don Quixote asks his neighbor, Sancho Panza, to be his squire, promising to make him governor of an island. Sancho agrees, and the pair sneak off in the early dawn. At this point their adventures begin, starting with Don Quixote’s attack on the windmills.

Miguel de Cervantes Saavedra created a wonderful, hilarious masterpiece when he penned Don Quixote. Even in today’s society the plot is relevant and and the characters leap off the pages. The extremes of the human condition are all laid out in glorious prose that has been beautifully translated to English in 2003 by Edith Grossman. The New York Times called Grossman’s translation a “major literary achievement.”

In the original version of Don Quixote there are basically two different types of Castilian Spanish: Old Castilian is spoken only by Don Quixote, while the rest of the roles speak a modern version of Spanish. The Old Castilian of Don Quixote is for comic relief – he copies the language spoken in the chivalric books that made him crazy; and many times, when he talks nobody is able to understand him because his language is too old. This comedic effect translates well to Modern English when the translator has Don Quixote use  Shakespearean English phrases.

I write fantasy, and I read widely. But to those purists who decry the work of genre fiction writers as being “created for the masses,” I would like to say this: it is quite clear that the modern perception of “fantasy” as having no literary merit is complete hogwash when you look at the books that make up the western cannon of great literature. ALL of them are fantasies of one sort or another, beginning with Don Quixote and going forward, and all of them were created for the enjoyment of the masses.