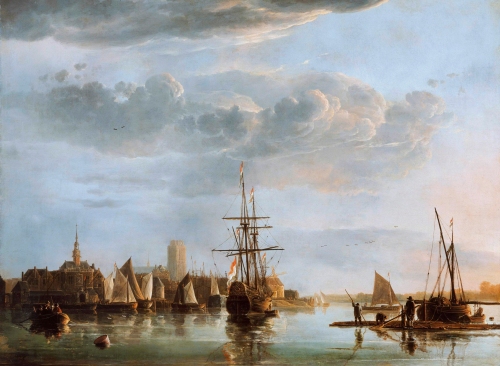 We see history in action, a working harbor alive and bustling with activity beneath a sky larger and more powerful than the sea. The eye is drawn to the center, to the majestic vessel moored in the harbor.

But that’s not where the action is.

In the bottom left, a barrel has fallen from a ship, perhaps during unloading, and floats freely. A small boat filled with sailors rows out to retrieve it. Beyond, at the docks, seagulls skim, sailing just above the water.

In the lower right, a raft of logs is guided past a moored ship, a small one perhaps waiting for a berth.

A fishing vessel heads out to sea.

The piers are jammed with ships. Stevedores in browns and dark colors blend into the background as they work the docks. They are laborers without whom the port would grind to a halt. They’re nearly invisible, yet Cuyp paints them with movement, bringing life to their anonymity.

This is a painting with many stories to tell.

About Aelbert Cuyp’s style, via Wikipedia:

Sunlight in his paintings rakes across the panel, accentuating small bits of detail in the golden light. In large, atmospheric panoramas of the countryside, the highlights on a blade of meadow grass, the mane of a tranquil horse, the horn of a dairy cow reclining by a stream, or the tip of a peasant’s hat are all caught in a bath of yellow ocher light. The richly varnished medium refracts the rays of light like a jewel as it dissolves into numerous glazed layers. Cuyp’s landscapes were based on reality and on his own invention of what an enchanting landscape should be.

Cuyp’s drawings reveal him to be a draftsman of superior quality. Light-drenched washes of golden-brown ink depict a distant view of the city of Dordrecht or Utrecht. [1]

Aelbert Jacobszoon Cuyp (Dutch pronunciation: [kœyp]) (or Cuijp; 20 October 1620 – 15 November 1691) was one of the leading Dutch Golden Age painters, producing mainly landscapes. The most famous of a family of painters, the pupil of his father, Jacob Gerritszoon Cuyp (1594–1651/52), he is especially known for his large views of Dutch riverside scenes in a golden early morning or late afternoon light. Little is known of his life. He was born and died in Dordrecht. [1]