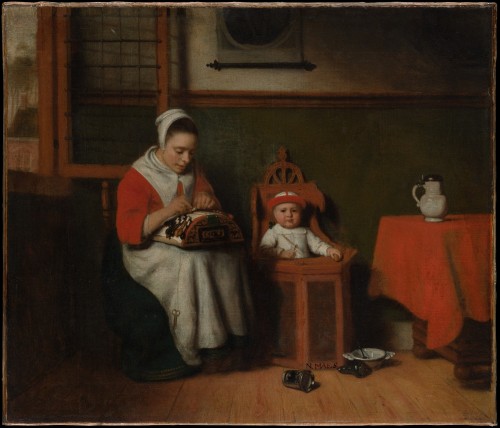 About this image, via Wikipedia:

The Lacemaker (circa 1656) is an oil on canvas painting by the Dutch painter Nicolaes Maes. It is an example of Dutch Golden Age painting and is part of the collection of the Metropolitan Museum of Art.

This painting is typical of many paintings of women in interiors painted by Maes in the 1650s. The woman is making bobbin lace using a lace pillow that can be seen in other Maes paintings of lacemakers.

The child in a highchair was a popular subject for many Dutch genre painters, and this painting shows how it was used as a safe place to play as well as for eating. The empty bowl of porridge is on the floor along with some other items the boy has let fall. He is wearing a red valhoed or falling cap, which seems to indicate that confinement in the chair is necessary if any lacemaking is going to get done.

A baby bumper headguard cap, also known as a falling cap, or pudding hat, is a protective hat worn by children learning to walk, to protect their heads in case of falls.

Known as a pudding or black pudding, a version used during the early 17th century until the late 18th century was usually open at the top and featured a sausage-shaped bumper roll that circled the head like a crown. It was fastened with straps under the chin.

About the Artist via Wikipedia

From Wikipedia: Nicolaes Maes, also known as Nicolaes Maas (January 1634 – November 24, 1693 (buried)) was a Dutch Golden Age painter of genre and portraits. In about 1648 he went to Amsterdam, where he entered Rembrandt‘s studio. Before his return to Dordrecht in 1653 Maes painted a few Rembrandtesque genre pictures, with life-size figures and in a deep glowing scheme of colour, like the Reverie at the Rijksmuseum in Amsterdam, the Card Players at the National Gallery, and the Children with a Goat Carriage. So closely did his early style resemble that of Rembrandt, that the last-named picture, and other canvases in the Leipzig and Budapest galleries and in the collection of Lord Radnor, were or are still ascribed to Rembrandt.

In his best period, from 1655 to 1665, Maes devoted himself to domestic genre on a smaller scale, retaining to a great extent the magic of colour he had learnt from Rembrandt. Only on rare occasions did he treat scriptural subjects, as in Hagar’s Departure, which has been ascribed to Rembrandt. His favorite subjects were women spinning, or reading the Bible, or preparing a meal. He had a particular fascination with the subject of lacemaking and made almost a dozen versions on this subject.

While he continued to reside in Dordrecht until 1673, when he settled in Amsterdam, he visited or even lived in Antwerp between 1665 and 1667. His Antwerp period coincides with a complete change in style and subject. He devoted himself almost exclusively to portraiture, and abandoned the intimacy and glowing color harmonies of his earlier work for a careless elegance which suggests the influence of Van Dyck. So great indeed was the change, that it gave rise to the theory of the existence of another Maes, of Brussels. His registered pupils were Justus de Gelder, Margaretha van Godewijk, Jacob Moelaert, and Johannes Vollevens.[1] Maes died in Amsterdam.

#FineArtFriday: Landscape with the Parable of the Sower by Pieter Bruegel the Elder 1552 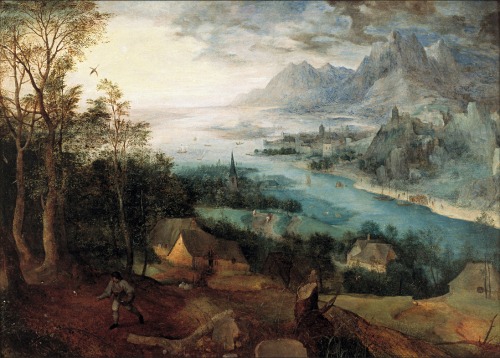 Title: Landscape with the Parable of the Sower

Pieter Brugel the Elder was one of my first influences in the world of art appreciation. What always strikes me about his work is the innocent joy he infused in his art. This particular painting has a delicate, almost watercolor feel to it.

In this piece, the color of the river is the unique shade of blue that appears in his other works.

The parable he illustrates (via Wikipedia):

In the (Biblical) story, a sower sows seed and does so indiscriminately. Some seed falls on the path (wayside) with no soil, some on rocky ground with little soil, and some on soil which contained thorns. In these cases the seed is taken away or fails to produce a crop, but when it falls on good soil it grows, yielding thirty, sixty, or a hundredfold.

Jesus then (only in the presence of his disciples) explains that the seed represents the Gospel (the sower being anyone who proclaims it), and the various soils represent people’s responses to it (the first three representing rejection while the last represents acceptance).

Pieter Bruegel (also Brueghel or Breughel) the Elder (/ˈbrɔɪɡəl/, also US: /ˈbruːɡəl, ˈbrɜːɡəl/, Dutch: [ˈpitər ˈbrøːɣəl] c. 1525–1530 – 9 September 1569) was the most significant artist of Dutch and Flemish Renaissance painting, a painter and printmaker from Brabant, known for his landscapes and peasant scenes (so-called genre painting); he was a pioneer in making both types of subject the focus in large paintings.

He was a formative influence on Dutch Golden Age painting and later painting in general in his innovative choices of subject matter, as one of the first generation of artists to grow up when religious subjects had ceased to be the natural subject matter of painting. He also painted no portraits, the other mainstay of Netherlandish art. After his training and travels to Italy, he returned in 1555 to settle in Antwerp, where he worked mainly as a prolific designer of prints for the leading publisher of the day. Only towards the end of the decade did he switch to make painting his main medium, and all his famous paintings come from the following period of little more than a decade before his early death, when he was probably in his early forties, and at the height of his powers.

Comments Off on #FineArtFriday: Landscape with the Parable of the Sower by Pieter Bruegel the Elder 1552